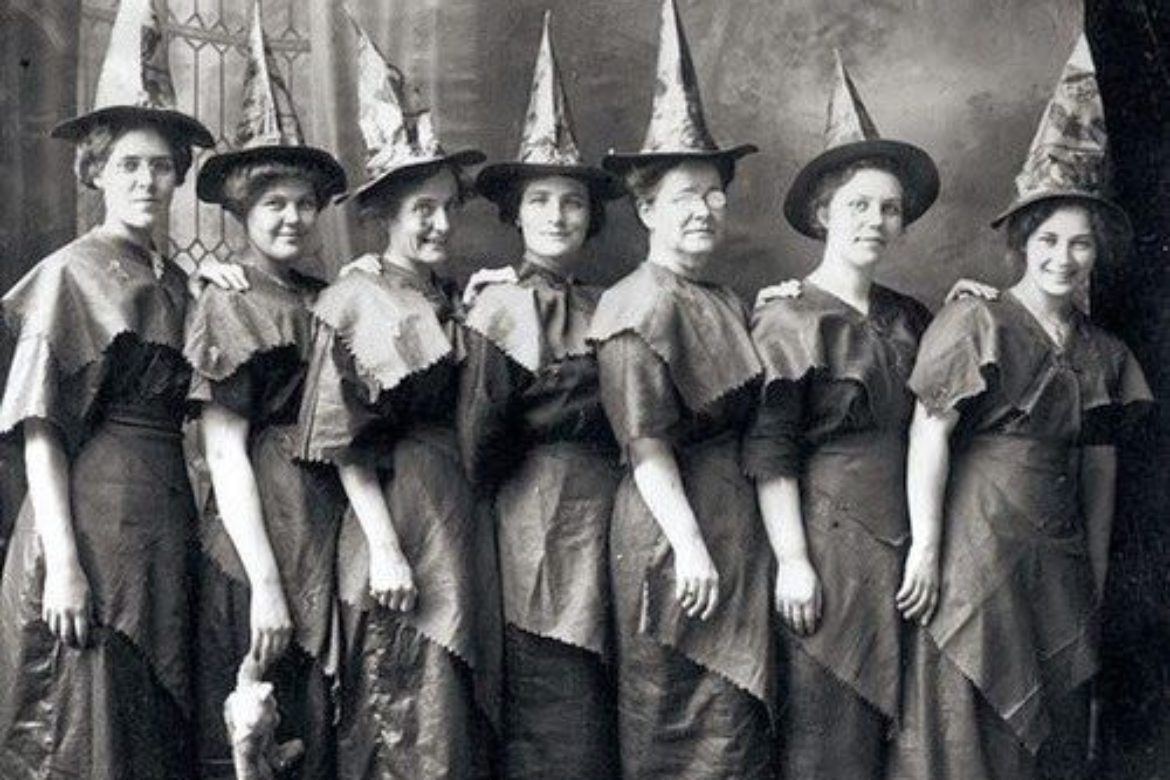 It’s October – almost time for Halloween! What started as a Celtic celebration of harvest and the beginning of winter 2000 years ago, is today a beloved worldwide holiday. The wearing of costumes on Halloween developed from the belief of spirits walking the earth during this night, as the veil between their world and ours lifted and the dead could return. People put on masks and costumes when leaving the house after dark so that those wandering spirits would see them as a fellow ghost.

Halloween costumes are traditionally based on supernatural or folkloristic characters. The first mass produced costumes appearing in stores during the 1930s were also inspired by popular films, literature and radio.

We’d like to give you a brief introduction to traditional Halloween costumes and hope to inspire you for your costume choices this season!

The witch was a popular 19th century costume, as illustrated in these wonderful victorian photographs:

And the 20th century turned the traditional witch into a flirty pin-up girl!

Why is the witch a fabulous choice for period costume lovers you ask? Because the witch costume pretty much translates into any time period! The costume is mostly based on a black dress, pointy hat and old fashioned broom, which makes it adaptable for lots of period fashions. Maybe you already own a black Victorian gown? Just add accessories and your Victorian witch is ready! And if you would like to make your own we have a few pattern recommendations for you! The beautiful one-piece “1882 tea gown” by Truly Victorian is quick to make up (as tried by us!!) and makes a fabulous witch gown! Or if you like it a bit more opulent we’d suggest a combination of black bodice and skirt, like the “1878 fan tail skirt” , teamed with a high-necked cuirass bodice. Maybe add a black shoulder cape for a dramatic effect!

If you love vintage fashion you might already own a perfect black pin-up outfit! Classic 1950s circle skirt dresses like the Folkwear “Blonde Bombshell” Dress are particularly lovely! Or how about a sweet 1930s playsuit or high waist shorts and top (like Folkwear’s amazing “Hollywood Pants”)! Our particular design favourite is definitely the 1920s witch though! A sassy and witchy evening frock is made up in no time at all, like our 1928 evening dress!

With the birth of cinema in the early 20th century many popular classic horror characters came to life on the silver screen and thus became a part of popular culture.  So “Nosferatu”, “Dracula”, “Jekyll & Hyde” and “Frankenstein” started inspiring Halloween costumes, too! The classic vampire / ghost / zombie – theme is perfectly adaptable throughout any century (they are undead after all!) and offers us endless possibilities! The aristocratic 18th century vampire has a firm place in our hearts ever since Anne Rice’s “Interview with a Vampire”!

Lestat and Louis in “Interview with a Vampire”

Beautiful and bloodthirsty, clad in silky frock coats, Lestat and Louis from Rice’s books are the perfect vampire icons, and a fabulous inspiration for all 18th century lovers! An elegant silk habit combined with matching makeup will turn you into a vampire in no time! A multitude of makeup tutorials can be found on Youtube! Get yourself a nice pair of

Fang Caps, like these by Scarecrow to complete the look. An opulent silk robe a la francaise makes for an amazing 18th century vampire gown! If you are an 18th century lover you might have one already and only need to add accessories to vamp it up!

If the 19th century is closer to your heart you might want to opt for a Victorian vampire instead! A romantic bustle gown like the 1883 tail bodice teamed with a lovely petticoat adds a touch of glamour!

Or maybe take your vampire into the 1920s – early movies such as “Nosferatu” or “The cabinet of Dr. Caligari” put the undead theme firmly on the map in 20s pop culture!

Of course the same applies to the classic ghost or zombie variation – both themes translate perfectly into any era of your choice! The bat was already a popular costume in the 19th century! Maybe you remember the beautiful operetta “Die Fledermaus” (The Bat) by Austrian composer Johann Strauss, debuted in 1874, in which a drunk gent in a bat costume sets in motion a series of unfortunate events!

Incredibly charming is this bat lady from the 1880s: 19th century fancy dress often featured shorter skirt hems than everyday clothes, maybe even revealing the ankles (even back then there was a taste for “risque” costumes!), just like this lovely ruffled skirt with matching bodice. A lovely batwing cape, long gloves and a cute hat complete the look. If you’d like to make a similar outfit the “Saloon Girl” by Laughing Moon would be a perfect base! This pattern offers a combination of short skirt and matching bodice, which you can make up as desired.

Of course the bat will work just as well in other eras! Check out these two charming examples, dating to 1909 (left) and the 1920s: You see there is absolutely no limit for historical/vintage Halloween costumes! If you need more inspiration feel free to visit our Pinterest board with even more costuming ideas! Happy costuming!